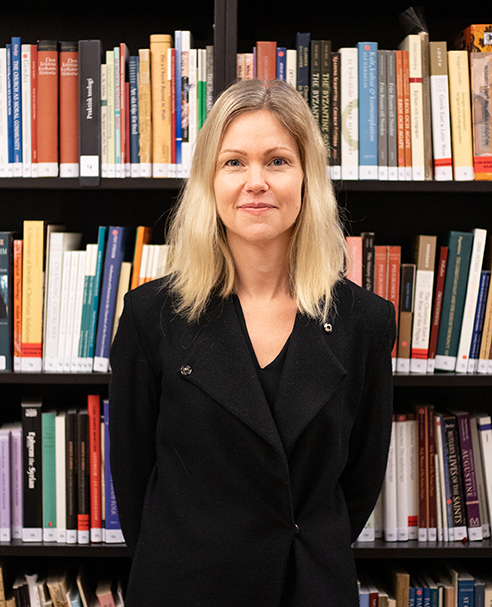 Miriam Hjälm is a senior lecturer at the Department of Eastern Christian Studies at Stockholm School of Theology where she is currently teaching biblical Hebrew, the history of religion (esp. Judaism and Islam), and courses on how sacred texts has been used and understood in Eastern Christianity.

She has an MA in oriental studies from Uppsala and a one-year program degree from the Hebrew University. She completed her PhD thesis in semitic languages at Uppsala University in 2015. Her thesis, Christian Arabic Versions of Daniel (Brill: 2016), focused on translation techniques and manuscript descriptions in Arabic versions of Daniel. The methods used in translation was based on and compared with a study in Judaeo-Arabic translations by her extended supervisor, Prof. Meira Polliack (Tel Aviv University). In 2015 she moved to Munich (Ludwig-Maximilian University) and joined the German-Israeli Biblia Arabica project where she continued to locate, systematize, and analyze Christian Arabic Bible translations (https://biblia-arabica.com/).

She has previously taught Hebrew at Uppsala University and at Ludwig Maximilian University, and has taught other Semitic languages, such as Syriac and Arabic, as well as courses relating the history and cultures of the users of these languages.

Miriam is working on a research project sponsored by the Swedish Research Council (2017-01630).The project aims at studying various aspects of “Bible Theology” in early Christian Arabic texts, including Bible commentaries and the development of the biblical canon. In addition, she is interested in Jewish-Christian relations under Islam and how such contacts are expressed in polemical and exegetical tracts (https://www.swecris.se/betasearch/details/project/201701630VR?lang=en)

In addition, she is involved in the project “Retracing Connections: Byzantine Storyworlds” sponsored by Riksbankens Jubileumsfond (https://www.rj.se/en/anslag/2019/retracing-connections-byzantine-storyworlds-in-greek-arabic-georgian-and-old-slavonic-c.-950–c.-1100/).

Miriam is currently chair for the board of Saint Anna of Novgorod’s Orthodox Church in Stockholm and Uppsala.

Her vision is to study, spread knowledge, and create an interest in the Eastern Christian traditions, especially those in the Middle East, and the cultures in which these developed.

Publications and contributions to conferences